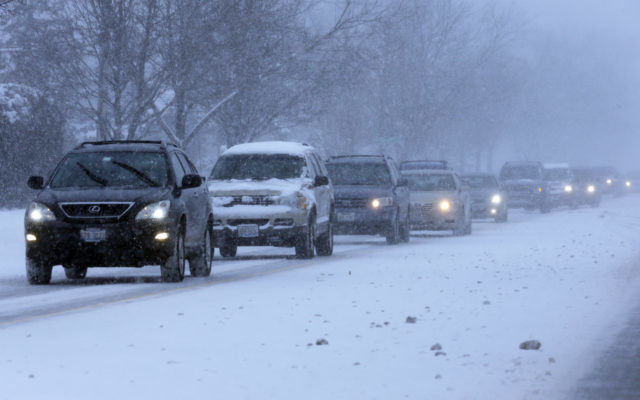 Commuters drive on snowy road in Chicago, Thursday, Jan. 2, 2014. Another one to three inches of snow could fall across the Chicago metro area Thursday with even more falling in the southern part of the region, according to the National Weather Service. (AP Photo/Nam Y. Huh)

Up to 52 cars are involved in a crash on the inbound Kennedy at North Avenue. The expressway remains shut down this morning for cleanup. Injuries have been reported, but they are believed to be minor. The collision happened when light snow started falling in the area, which may have caused slippery conditions. Meanwhile, I-55 is solid from Joliet through to downtown Chicago. Several accidents on I-55 including an overturned truck between Weber Road and Route 53. Also on I-80 there are reports of multiple accidents between Chicago and Larking.

The National Weather Service has issued a winter Weather Advisory for Chicagoland until 10 a.m. due to hazardous travel conditions.