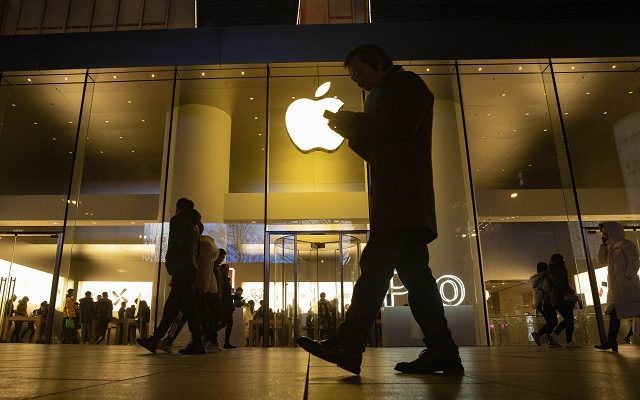 A man looks at his phone as he walks past a store of US tech giant Apple in a retail district in Beijing on Friday, Dec. 13, 2019. China deputy trade envoy says China, U.S. have reached trade deal, will reduce punitive tariffs on each other's goods (AP Photo/Ng Han Guan)

Shares of Apple climbed 3 percent on Monday — just enough to make the iPhone manufacturer the world’s very first $3 trillion company. The bump in Apple’s stock price — to an all-time high of $182.88 — was exactly three cents more than it needed to propel the company to its record-setting worth, financial analysts say. That figure dropped slightly later in the day. The news comes more than three years after Apple crossed the $1 trillion threshold in August 2018, and more than a year after it surpassed the $2 trillion mark in August 2020. What does it say about the economic state of the U.S. when a company’s worth passes $3 trillion during a pandemic?