Due to reports of protesters moving through the Will County area the Frankfort Police have sent out an alert to residents that reads as follows “There are reports of large groups of protesters in several suburban areas.  As a result, many local retailers are closing stores.  We ask our residents to remain at home, be cautious, and if you see anything suspicious call police immediately.”

1340-WJOL has learned that in light of these reports of protesters several big box stores in New Lenox have voluntarily decided to close early for the day. Mayor Tim Baldermann in a statement on his Facebook page asked that all residents stay “safe to home” and informed residents that police and emergency personnel around town and prepared should anything occur but that nothing has occurred in New Lenox as of yet. He also reiterated that a majority of business have closed for the day.

The Village of Tinley Park has issued a Curfew order effective tonight at 8:00 pm through 6:00 am Monday Morning due to heightened police activity and threats to our community. Non-essential travel is not recommended. We will evaluate this daily until the threat is gone.

Orland Park Mayor Keith Pekau confirmed around 3:45 p.m. that three arrests have been made in the village in connection to the looting. One adult and one juvenile were arrested in connection to an attempted robbery at a jewelry store on 151st Street, and one person has been charged with disorderly conduct at the mall.

The entrances to the mall are blocked, and several other businesses in both Orland and Tinley have closed as precautions and preparations for more damage to come later in the day.

In Aurora we have word of a traffic closure on I-88, and word from the city about protests:

From Aurora PD: APD ALERT: There are multiple protests in the City of Aurora. Please avoid the downtown area for your safety. Downtown businesses are asked to please close their businesses immediately. #AuroraIL 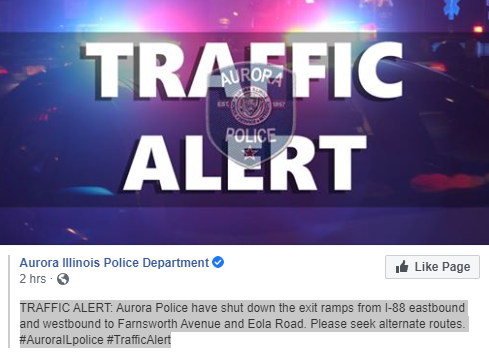 It’s Official: The Old Joliet Prison Will Be Home To The Blues Brothers Approved Ventures

Will County Placed In Warning Level For Coronavirus