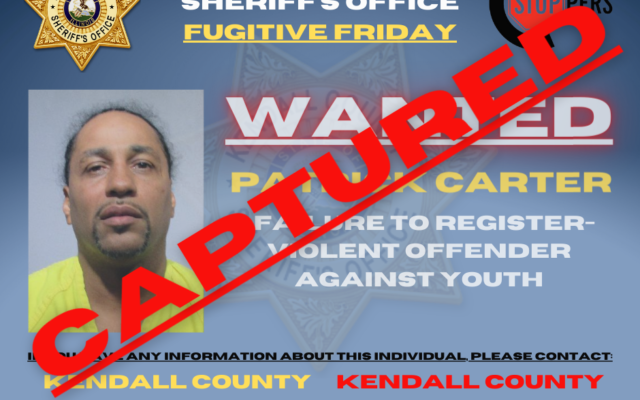 On February 11th, 2021 at approximately 7:15 AM, fugitive Patrick Carter was apprehended in the 100 block of Harbor Drive in Oswego, Illinois by members of the United States Marshal’s Great Lakes Regional Fugitive Task Force and the Kendall County Sheriff’s Office.

Carter, a 52-year-old male from the 100 block of Harbor Drive in Oswego Township, was wanted for failing to appear in court in reference to a charge of failing to register as a violent offender against youth.  Carter had additional warrants out of Rockford for aggravated domestic battery, criminal damage to property, and failure to appear on a driving while license revoked charge out of Winnebago County.  Carter is currently being held in the Kendall County jail on multiple warrants.  Carter had been a fugitive since September 28th, 2020.

The Kendall County Sheriff’s Office would like to remind citizens to call Crime Stoppers at 630-553-5999 to report any information regarding a fugitive’s whereabouts. Callers remain anonymous and may be eligible for a reward if the information leads to the apprehension of a fugitive. You may also visit the Kendall County Facebook “Fugitive Fridays” for the fugitive of the week.

The public is reminded that criminal defendants are presumed innocent until the government is able to prove its charges in court beyond a reasonable doubt.